A transcription chain is a set of concatenated "steps" one has to perform in order to go from a "recorded interview" to a findable, accessible and viewable digital AV-document with relevant metadata on the Internet.

Here below, we will explain the picture above: the various steps one may take in a transcription chain. It has to be stressed that there is no "perfect" solution. The Transcription Chain is a set of consecutive steps one may take to reach the final goal: a findable, accessible and viewable digital AV-document.

+ - From an interview to a digital repository Click to collapse

Basically, one may divide the interviews in existing (already recorded) and new (to be made) and in analogue and digital. Analogue interviews cannot be accessed in another way than “going to the place where the physical object is stored and playing it on a similar device as it was recorded”. So, to make them accessible via the Internet, analogue recordings need to be digitized. Moreover, it is not very likely that many new interviews will be recorded on an analogue device.

So in the process "From interview to a digital recording suitable for recognition / alignment" we have three possibilities.

A simple version of the digitisation process is:

Play the analogue recording and send the analogue output via an AD-converter to a computer where it will be stored as a digital file.

This is true, but to get the best quality one need to consider a lot of “issues”. 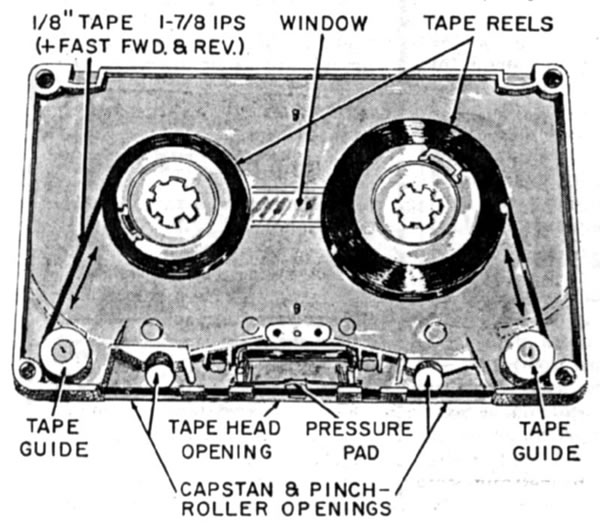 The quality of the analogue playing device must be as good as possible. Using “just a tape recorder or cassette player” may introduce all kinds of (disturbing) artefacts in the digital version of the recording. A nice overview of good practice is given by Kees Grijpink of the Meertens Institute in Amsterdam.

During a visit to the Meertens Institute Kees showed how one need to open a compact cassette, clean the cassette, remove al dust, clean the tape guides and "make them going", remove, clean and replace the tape heads with alcohol , make the pressure pad working again (they dry-out and become less flexible) and, very important, adjust the azimuth of the tape head (for a nice video instruction see here).

Modern software can (partly) correct for azimuth deviations, but it is prefered to do it when one digitize the recording.

More or less the same need to be done with tapes and tape recorders. 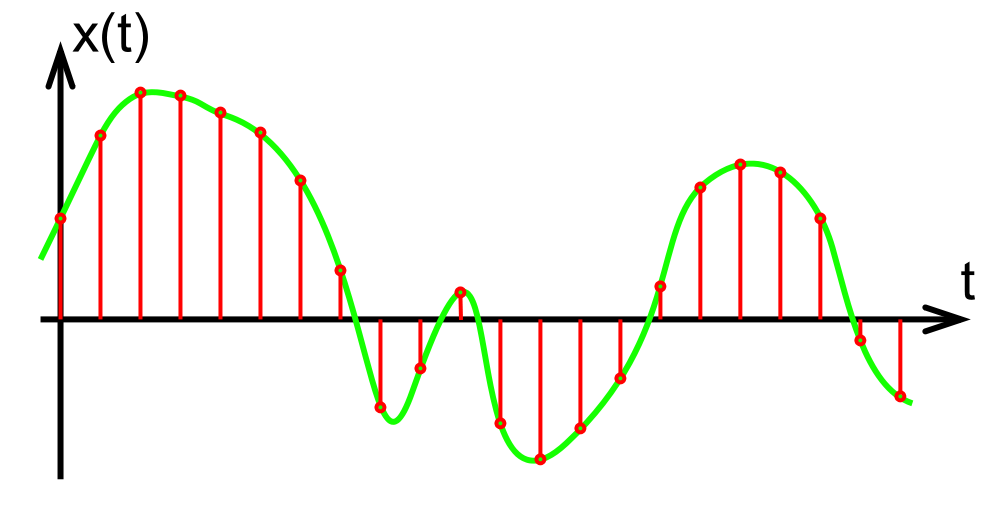 The analogue signal will be digitized via a so-called AD-convertor. Basically, the analogue signal is {tip title="Sampling" content="Sampling means measuring the value (the amplitude) of a sound-wave at a certain time. If a 2 byte number is used for the sample of the sound-wave, the min and max value of the sound-wave will be between -32768 and 32767." class="blue"}sampled{/tip} each x-milliseconds and the value of the analogue sample at that time, is stored as a number in a digital file. The smaller the interval between two sample points, the better the resulting quality, but the more disk-space a recording will need.

The amount of samples per time interval is called the Sample Frequency and is expressed in Herz (Hz).  A sampling frequency of 16.000 Hz (=16 kHz) means that the sound-wave is measured 16.000 times per second.

But what is an ideal sampling frequency for spoken interviews, for the human voice?

An important criterium is the so-called Nyquist sampling criterion. Without becoming too detailed (see the link for more information) one may say that if the maximum frequency of a sound wave is N (i.e. the sound wave trills N-times per second) the amount of samples / second one need to record is 2xN. The maximun range of the human voice (in speech) is ±8000Hz so the maximal sampling frequency will be around 16.000 Hz.

Nearly all ASR-engines require a sampling frequency of 16 kHz. However, because memory is really cheap and plentiful available and a lot of research is done on the "improvement" of the sound quality, it may be wise to follow the advise of the European Broadcast Union and use a much higher sampling rate: 96kHz and a 4-byte (=32 bits) value.

This will increase the amount of disk-memory with a factor 12. So do it if you have enough disk-memory available and store the files in a kind of black archive. For the "daily" use (sending the recordings to collegues, listen to speech and process the recording with an ASR-engine) use the 16-16 version.

If the original recording was in mono, use mono. Often the default settings of recording software is set to 44.1 kHz stereo recording.
One may argue that the high sampling freqency may be usefull in the near future, but a stereo-file from a mono-recording (2x the same signal on the left and the right channel) doesn't make sense.

When the original recording was done with 2 microphones (each on a separate channel) and there is a clear difference between the left and right channel, it is wise to convert it to a digtal stereo-file.

For new recordings this is different: stereo or even better: each speaker with his/her own microphone recorded on a separate channel should be ideal.

When converting the analogue signal into a digital equivalent, the most easy and cheap solution is to plugin the line-out from your tape/cassette recorder in the input-hole of the soundcard of your computer.

This may result in "acceptable" results, but the quality of the digital-reording heavenly depends of:

If you plan to digitize a lot of analogue recordings, it may be wise to invest a bit in a good sound card. The best, and most practical solution is an external USB-soundcard. The advantage of such a device is that:

There are many free and paid software packages that can be used for the recording. A nice overview of some free tools can be found here.

If you eally plan to do massive digitizing of you analogue collection, it may be wise to buy a (semi-)professional one where you can do things as azimuth correction, noise cancelling, filtering and more.

The last years, many anlogue interview collections were digitized. It may be the case that the end-result is sub-optimal, and it should be better to start-over again, but here we will handle just the transformation from one existing format into an other.

There are three major groups of audio file formats:

Header of a RIFF-WAV file

The first one is just a simple array of integers. The signal was sampled with a certain sample frequancy (see tab From analogue to digital) and each consecutive sample is stored in the array. The difference in the uncompressed formats is the way the signal is written (big endian or small endian) and the header (=metadata) stored in the audio-file.

This metadata makes it possible for a software programs to "know" if the recording was in mono or stereo, what the sample frequency was , how many bits are used for one sample and how many audio-samples there are. Moreover, additional information can be stored such as the owner, the software/hardware used for the recording and more. These uncompressed audio formats require the most disk-space but are "fast" because no additional calculation has to be done for reading and writing the files and they have the highest audio quality.

The amount of disk space necessary for your audio files may be an issue. With lossless compression, audio files are written in a "smart" way so they absorb less space but do not lose any information. From a lossless compression you alway can go back to the umcompressed format and no information will lost.
The disadvantage is that you need some computing to open the file (for reading, editing or playing) and to write the file back to the hard disk. So for long time storage when there is no need to access the files very often, lossless compression is an optimal choice.

The human ear is not lineair-sensible: i.e. we hear the difference between 100Hz and 110Hz quite well but not the difference between 6000Hz and 6010Hz. So, it is possible to compress the sound with a lossy data compression: a data encoding method that use inexact approximations and partial data discarding to reduce file sizes significantly, typically by a factor of 10 without a huge loss of audio quality. However, the more we compress, the better we do hear it.

For listening to the files, this partial loss of quality is not a big thing: we still can perfectly hear and understand what someone is telling in an interview. For the automatic recognition however, a strong compression may increase the word-error-rate.

So the best thing to do is: use the original quality (uncompressed or lossless compressed) for ASR, Aligment and (eventually) non-verbal analyses and use the compressed versions for access via the internet

Conversion on the computer

For both Windows and Apple there are dozens of good and free conversion programs that turn your audio into the right format for ASR. So, the first thing you should do is to have a good search on the web. However, to help you doing it, here are two programs that easily do the job:

Conversion on the web

There are various (good) webservices that convert your audio into other formats.

For new AV-recordings it makes sense to create a recording situation, optimized for technology such as ASR, Aligment, Emotion Detection, Facial Expression Analyses and more.

The benefits of the approach mentioned here are great. Separate channels per speaker makes it possible to do automatic turn-taking, it prevents that a louder speaking person "overrules" a softer speaking person and the speech can be transcribed even if people are talking together.